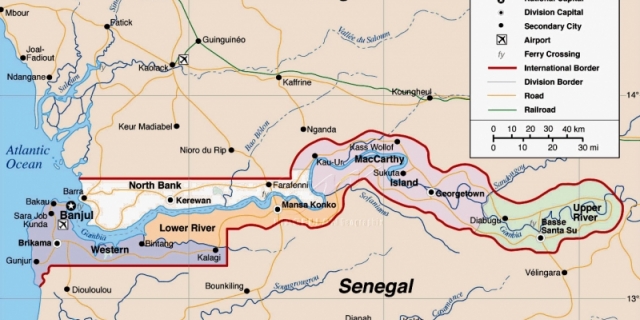 Location
Gambia is situated in West Africa, north of the equator at the Atlantic Ocean and the borders Senegal. With an area of 11300 square kilometers Gambia is about one fifth of the Netherlands and Belgium together. In fact, Gambia is a long strip of land, intersected by the river Gambia. The country is barely wider than 30 kilometers, except for the coastal strip, which reaches about 70 kilometers, including the entrance to the Gambia River. From the extreme west to the eastern border with Senegal, the distance, measured as the crow flies, is about 320 kilometres. Gambia is enclosed on three sides by Senegal, a country that is more than 17 times as large and with which there are close ties. The landscape is slightly sloping. There are some hills but they are hardly recognizable as such. The highest point lies north of the inland Basse Santa Su, and is over 46 meters.
The capital of Gambia is Banjul.

History
Gambia was part of the Ghanaian Empire. The first written sources come from the ninth and tenth centuries, written by Arab traders. Via a trade route through the Sahara, the Arabs took slaves, gold and ivory from Gambia. In the fourteenth century Europeans came to West Africa to look for gold. In the fifteenth century the Portuguese took over the Arabs' trade via sea routes. Through the centuries Gambia was occupied by the French, the English and even partly by the Dutch. Led by the Portuguese, the slave trade became the driving force for Europeans in the 16th century. Only in 1906 the slave trade in Gambia was abolished.
In 1965 the English occupation came to an end and Gambia became independent. The country remained a member of the British Commonwealth of Nations and was a constitutional monarchy with the British Queen as head of state. In 1970 Gambia became a republic. There was a provisional military regime under the leadership of Lieutenant Yahya Jammeh. The military regime announced a return to democracy. In 1996 a commission was established to prepare elections. Yahya Jammeh, now a colonel, was sworn in as president on November 6, 1996. On 18 October 2001 he was re-elected for a term of five years. Also at the elections on 22 September 2006 he was re-elected as president for a period of 5 years.

State Form
The Gambia became a republic on 26 April 1970 with a head of state, a president who is also the head of government. The Gambia has one chamber (National Assembly) with 45 members elected by the people for five years. There are as many as there are administrative areas (45). The National Assembly is further expanded with eight members who have no voting rights: the Minister of Justice, a chairman, a deputy chairman and five deputy members. There are also five district heads (Chiefs) in the National Assembly.
General elections were held for the first time in 1964. As in England, the elections are held according to a district system. The Gambia is administratively divided into six divisions (provinces). These in turn are divided into 45 districts.
The Gambia was co-led by prime ministers. Pierre Sarr N'Jie served as chief minister between 1962-1965. He was succeeded by Jawara (1970-1994), who was active as Prime Minister during the reign of Queen Elizabeth II. Queen Elizabeth II had been the legal ruler of Gambia (1965-1970) for the previous five years. In 1994, following a coup d'état, Yahya Jammeh became Head of State and Government. Between 1994 and 1996 he was also head of the military junta.
Jammeh was in power for 22 years, after which he lost the elections of Adama Barrow in December 2016. In a state radio broadcast he said he accepted the result and that he would cooperate in a peaceful transfer of power. He came back to this in January 2017. He refused to resign and demanded new elections. Barrow was sworn in at the Gambian embassy in Senegal. After several West African countries then sent soldiers and mediators to Gambia, Jammeh declared in a television speech that he would step down anyway.

Culture
The Gambian population is very friendly, hospitable and relaxed. If you want to take a picture of someone, always ask for permission in advance. It may be that there is a charge. What you also need to pay attention to in Gambia is the "left/right hand rule". The left hand is in Gambia for unhygienic actions, so giving something to someone with your left hand is seen as an insult.
Gambia has a rich tradition in music. For many centuries musicians and griots (traditional praise singers) have told the stories of families and clans, so that the Wolof and the Mandinka get their own sense of identity. Many of the griots accompany themselves on the kora, a kind of harp, most of which are expertly made by the Mandinka. Gambia's literary tradition is therefore based on the family history and poetry that have been made by the griots for centuries.

Religion
Most of the Gambia is Islamic, about 90% of the population. The remaining 10% of the inhabitants of Gambia belong to another church, especially the Anglican and the Roman Catholic church. A large part of the population is strictly religious but does not express this very much. All over Gambia you will find mosques. The largest is in the capital Banjul and is aptly called 'Great Mosque'. There are two 'Big Mosques' in Banjul. From the colonial past, the Gambia has taken Sunday as a rest day. However, the holy day for the Islamic Gambians remains Friday.

Eating & Drinking in Gambia
Gambia is a fertile country rich in peanuts, bananas, mangos, melons and citrus fruits. Fruit grows in abundance. The traditional Gambian dishes are usually prepared with the most important products of the country such as peanuts, rice, couscous and chicken.
One can enjoy an endless supply of fresh fish. The local specialties are the 'Lady Fish' and the 'Snappers'. The fish is served with fragrant rice and vegetables but chips are also available. The menu also includes large prawns and tasty lobsters. But you should also try a local dish such as domodah, a delicious rice dish with a tasty sauce, prepared on the basis of Gambian peanuts. In Gambia you can enjoy a delicious meal in an excellent and inexpensive way.
A lot of drinking is a necessity. Always make sure that a bottle of water is opened at the table! With the exception of the interior, there is almost no spirit drink that is not available in hotels. The Gambia brewed beer, Julbrew, can stand comparison with the well-known brands well. However, there are plenty of alternatives that should be sought mainly in the rich variety of teas. The British influence is still noticeable in this area. The choice of soft drinks, from the pack, in bottles or in cans is very large.